Soups are great winter saviors and if they are easy to prepare, you get all that one can ask for in a dish. With winters catching on quick, the body starts to seek some warm, nourishing food and soups are certainly a way to incorporate all the nature’s goodness in a bowl. This is a classic dahl soup recipe – easy, quick and utterly butterly delicious !

Dahls are staple to Indian diet. An Indian meal is hardly considered complete without a generous helping of lentil dahls. Cooked nearly 2-3 times a day in a typical Indian household, we have a huge variety of lentils to choose from and various ways dahls are consumed. Dahls are cooked and eaten in dry, semi dry and curried forms. Many dishes even calls for flours made of certain dahls.

Here, though, dahls have a completely different perception. Indian cuisine is considered exotic and i often find people praising the aromatic flavours the Indian food brings to the table. Spicy, colorful and often rich, even simple gravy dishes have gained immense popularity in various countries. This i realised when i first went for an Indian meal outing here. To my surprise, i found various dahl preparations listed in the “soups” category. For quenching my curiosity, i ordered a dahl soup. What i got was a slightly richer and less spicy version of a typical Indian dahl dish. Except for a thicker consistency and that it was served along with bread slices, there was a little difference.

This was an interesting insight for me. I tweaked my dahl preperations a little and i tried a thick soup version for home too. To my surprise, i actually liked to have just dahl soup and bread for lunch as it was not too heavy on palate. During one such lunch, a German friend accompanied us and delighted to be served lentil dahl for lunch, asked me for the recipe. This recipe is a mixed dahl soup recipe which is lightly tempered with onions,tomatoes and Indian spices. 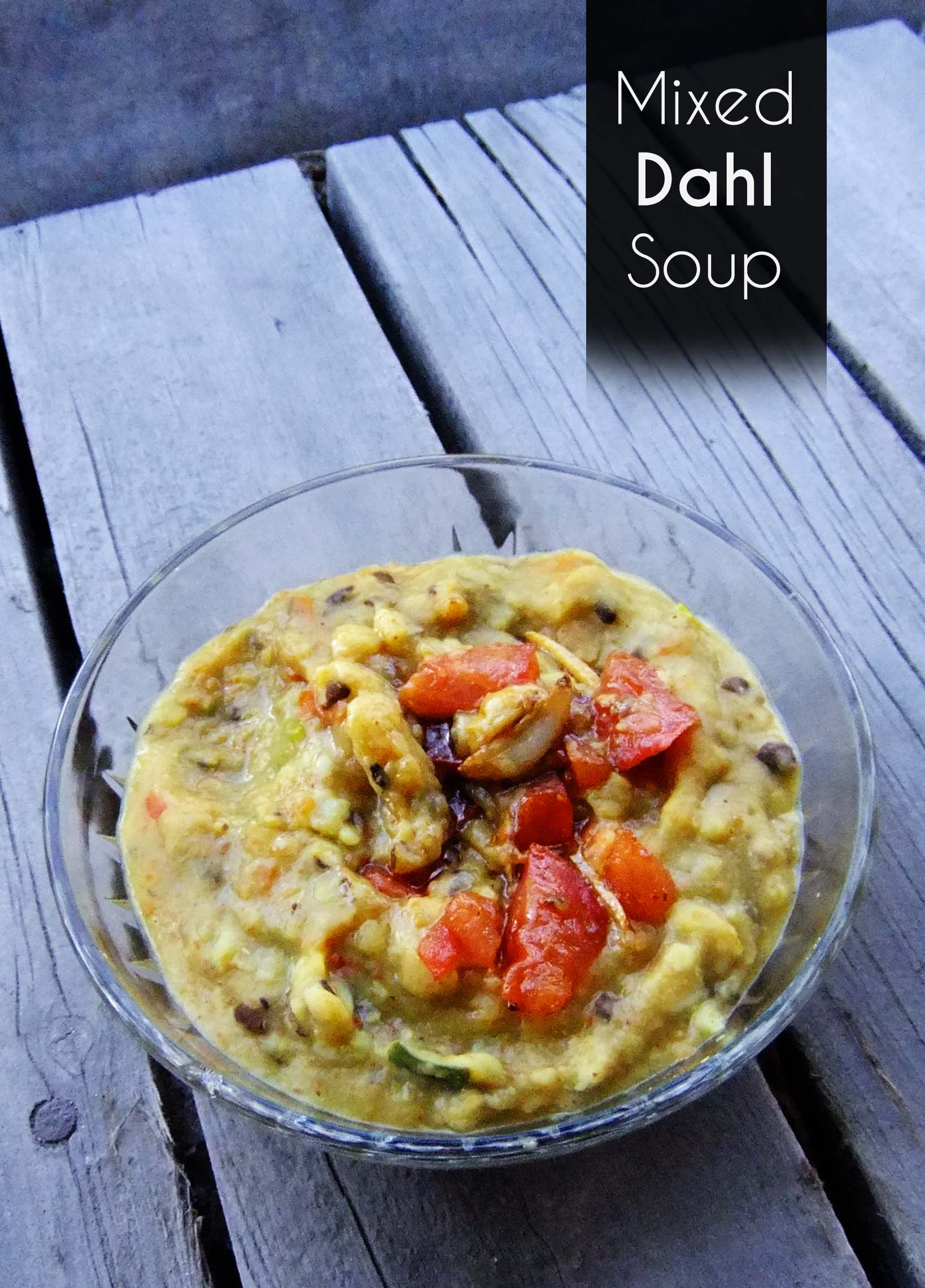 You can choose any type of dahls for your mixed dahl soup. I prefer to take dahls varying in textures for making the soups slightly more interesting. Most of the dahl requires 3-4 times water unless specified.

This recipe is a 2 step procedure :

Now, Indian pressure cookers are not digital cookers. For the Indian cookers, you would need to provide 2 whistles on high flame and then simmer for 10 minutes.

For serving, Pour dahl soup in a bowl. Add in some tempering/tadka on the top. Add in some lime juice and garnish with some lime wedges and fresh chopped coriander. Mixed Dahl soup is ready. Serve along with naans, chapati, toasted bread or cooked basmati rice.

Dahl soups are tasty, nourishing and soothing for curing those colds and coughs. Adding in lots of ginger and garlic helps in healing and ward off the winter blues. We had this mixed dahl soup with home made oven fresh naan and it was a delightful experience. Add a little dollop of cream or butter/ghee on top for a richer, tastier version. Enjoy !!