Kadhi is a yogurt based soupy dish which is popular all over India. Cooked in various different ways, kadhi is a very light and soothing accompaniment to rice, rotis, dhoklas and even pakoras. Today i am taking a trip down some memory lanes and recreating the sweet-savory surprise of Gujrati kadhi in my kitchen.

My family is crazy for Kadhi ! As a kid, we often had kadhi at home and i loved to have it with steamed rice. Kadhi to me is a dish which comes with a bold statement – ” You don’t have to over do the spices to make something delicious “. Indian dishes are usually given the reputation of being too spicy, hot etc. but this one dish has always been a #clean dish in that respect. It is my mother’s favorite and it totally is one of the best ways to cook with yogurt in my opinion.

At my house, we always had the punjabi kadhi (which is a gravy like consistency). Punjabi kadhi or the golden curry (as i called it as a kid) is made using the same basic ingredients as any kadhi – Besan/ chickpea flour, yogurt, water and salt (among other spices as per individual preference) but the difference is the addition of fritters in it which transforms the kadhi. People get creative with the pakoras and one can make the basic chickpea fritters to potato-onion, spinach, fenugreek etc. Sometimes my mom would skip the pakoras and add some vegetables right in the kadhi too and call it Stir fried vegetable Kadhi... try it , its delicious !! 🙂

The kadhi which we are making today though is fairly recent addition in my recipe box and i can say that it is stepping up the game and would become a staple soon. Being a north Indian, i never got the chance to try authentic Gujrati kadhi till i travelled to Ahmedabad for my undergrad studies. I lived in Ahmedabad for 4 years in a hostel and had canteen mess food throughout my stay there. That was when i actually started to get interested in different cuisines from various parts of India. To confess, the mess food is never great and my mess was no different but they tried their best to create their skewed versions of various curries and stir fry from various parts of India. Of the few dishes the mess absolutely nailed in terms of authenticity was the Gujrati Kadhi. My college situated in Gujrat and having locals cooks in the mess, this was not a surprise 😛 It was actually one of those dishes which kept me motivated to go to the mess all those years 😛

Originally the Gujrati Kadhi does not have red chili powder in the tempering but i guess the north Indian in me just could not resist a little spice. Feel free to omit it to make it a truly authentic Gujrati Kadhi.

This Kadhi is the ultimate combination of sour meets sweet meets savory. The usual combination is with rice and rotis but feel free to enjoy it on its own. If you are planning to make it into a soup meal, feel free to add in vegetables or dumplings (even pasta works !). yes, it would not be an Indian version with those additions but it is all about the taste right 😛

If you like the idea of kadhi, try these versions as well : 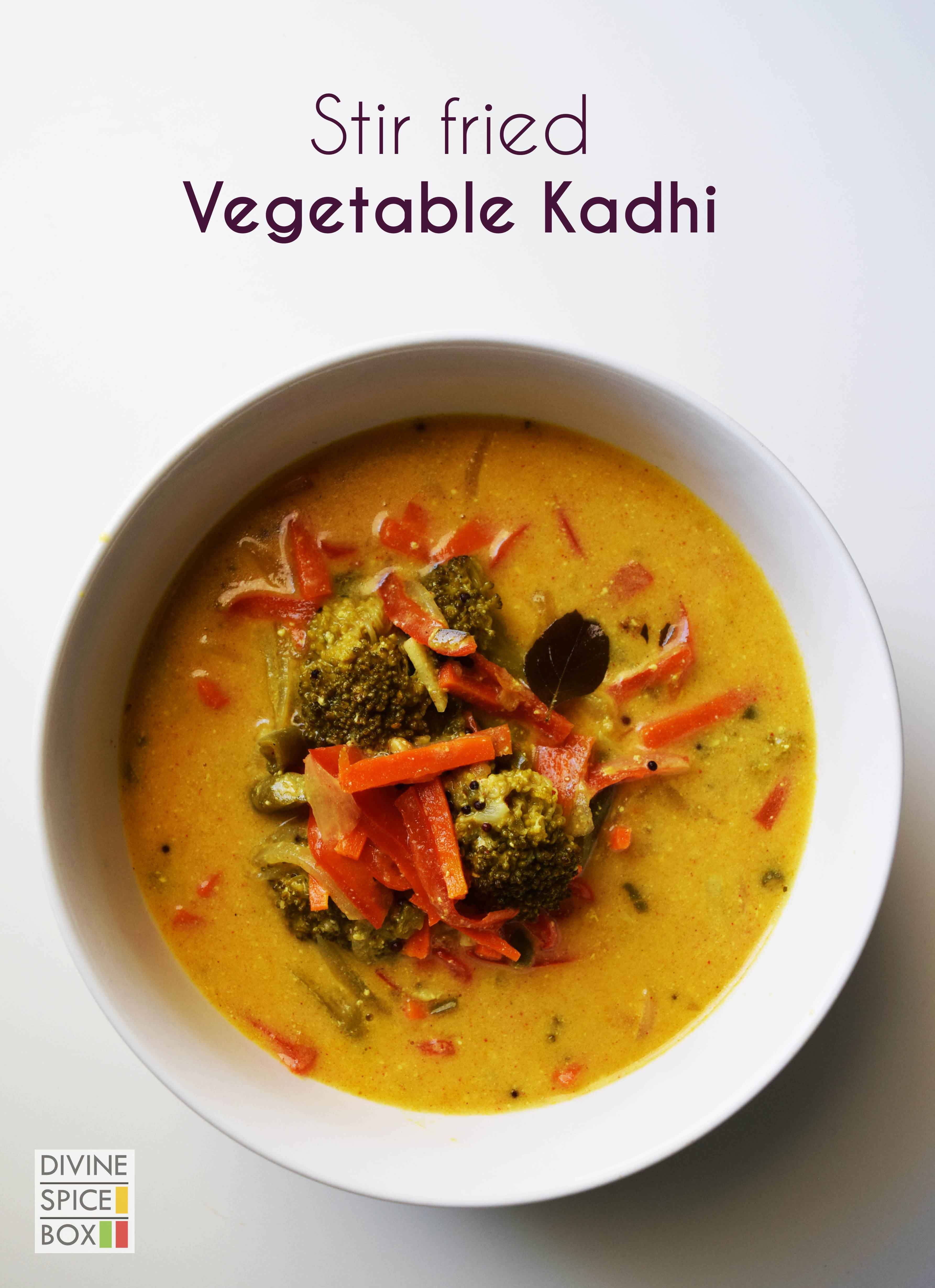 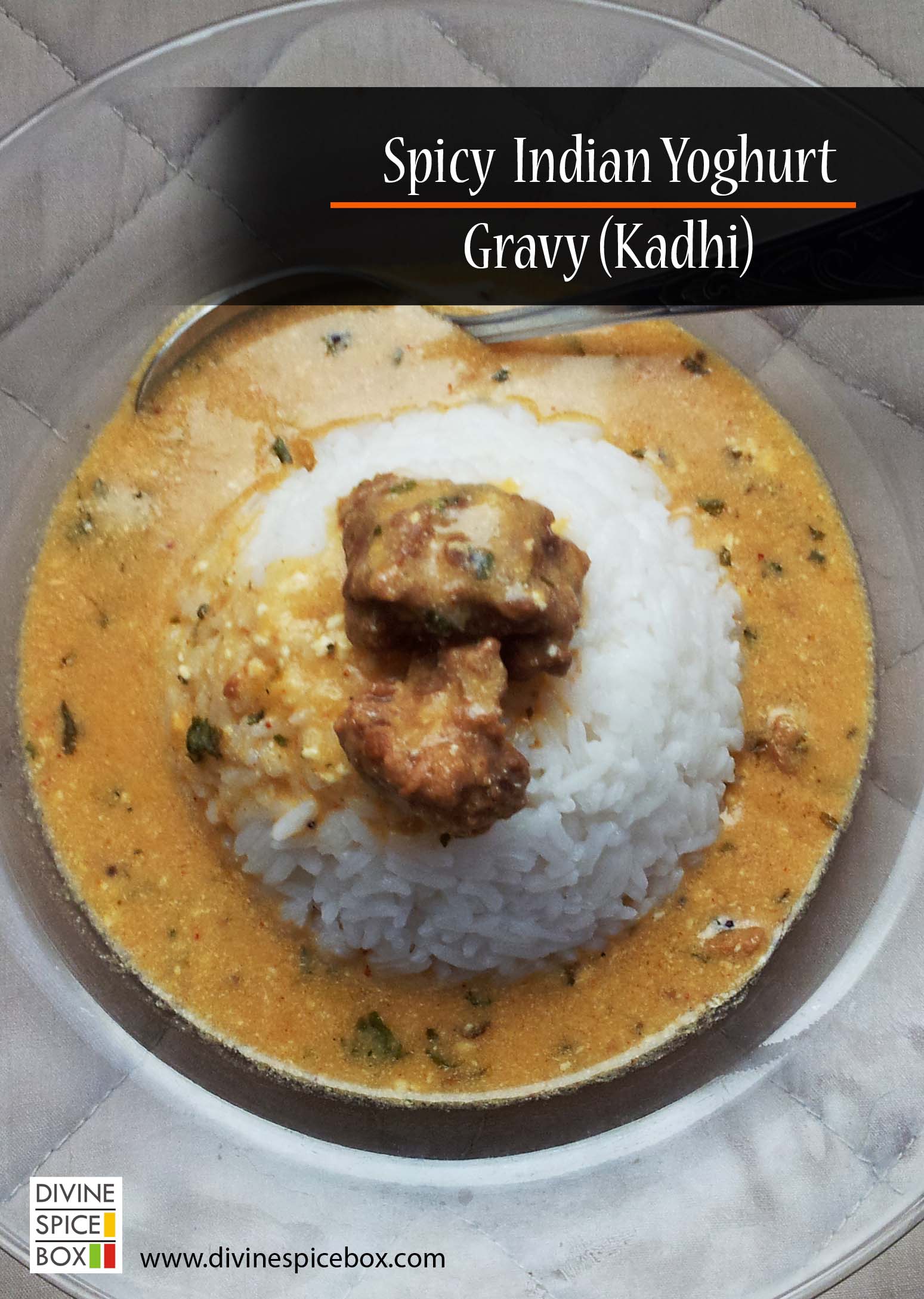