This Dessert is as good as a dessert can get. It’s chocolatey, gooey, comforting and sophisticated.. all at the same time. Looking for something healthier?? No problem, i got that covered here too! With not even an ounce of guilt, this Dessert is sure a winner for diabetes patients and others alike. What’s more – it’s vegan and gluten free ! Presenting Cinnamon scented oats tart with dark chocolate ganache 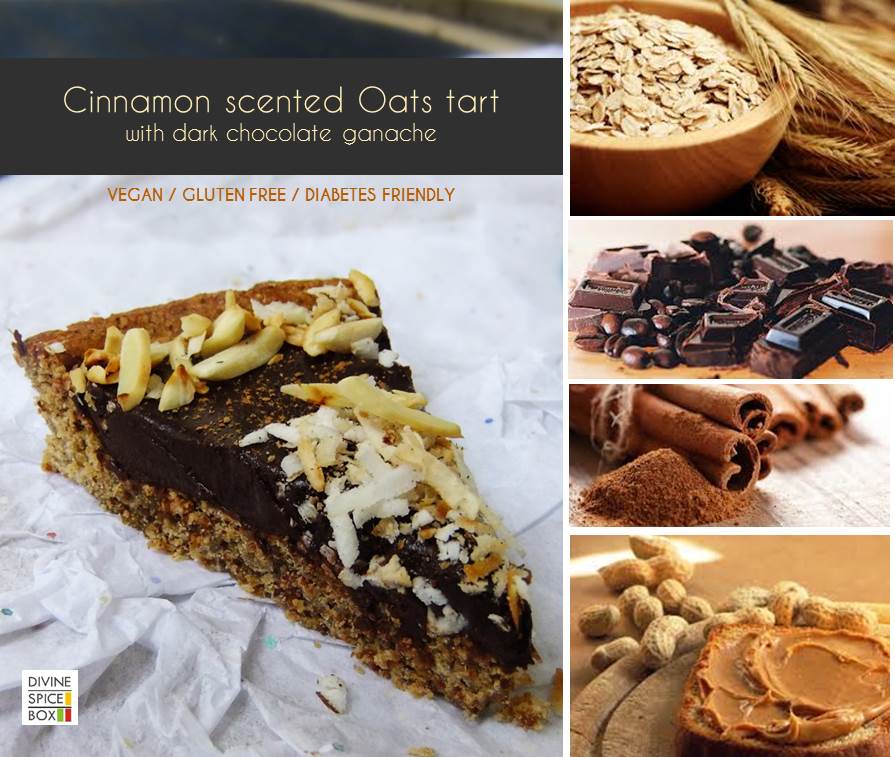 This dessert is a burst of flavors. The dark chocolate in combination with a kick of cinnamon brings out a sophisticated flavor profile in this oats tart. Not only that, the long list of health benefits of dark chocolate, oats and cinnamon makes this dessert  “truly irresistible!”. Let’s not waste any more time.. coz I am so excited to share this with you all.. So let’s jump right to the recipe!

DFT suggests to consume desserts during day time and avoid after dinner. Also, since Desserts are generally not recommended for diabetes, make sure you eat dessert once in a while and then compromise for carbs and sugars in your other meals. 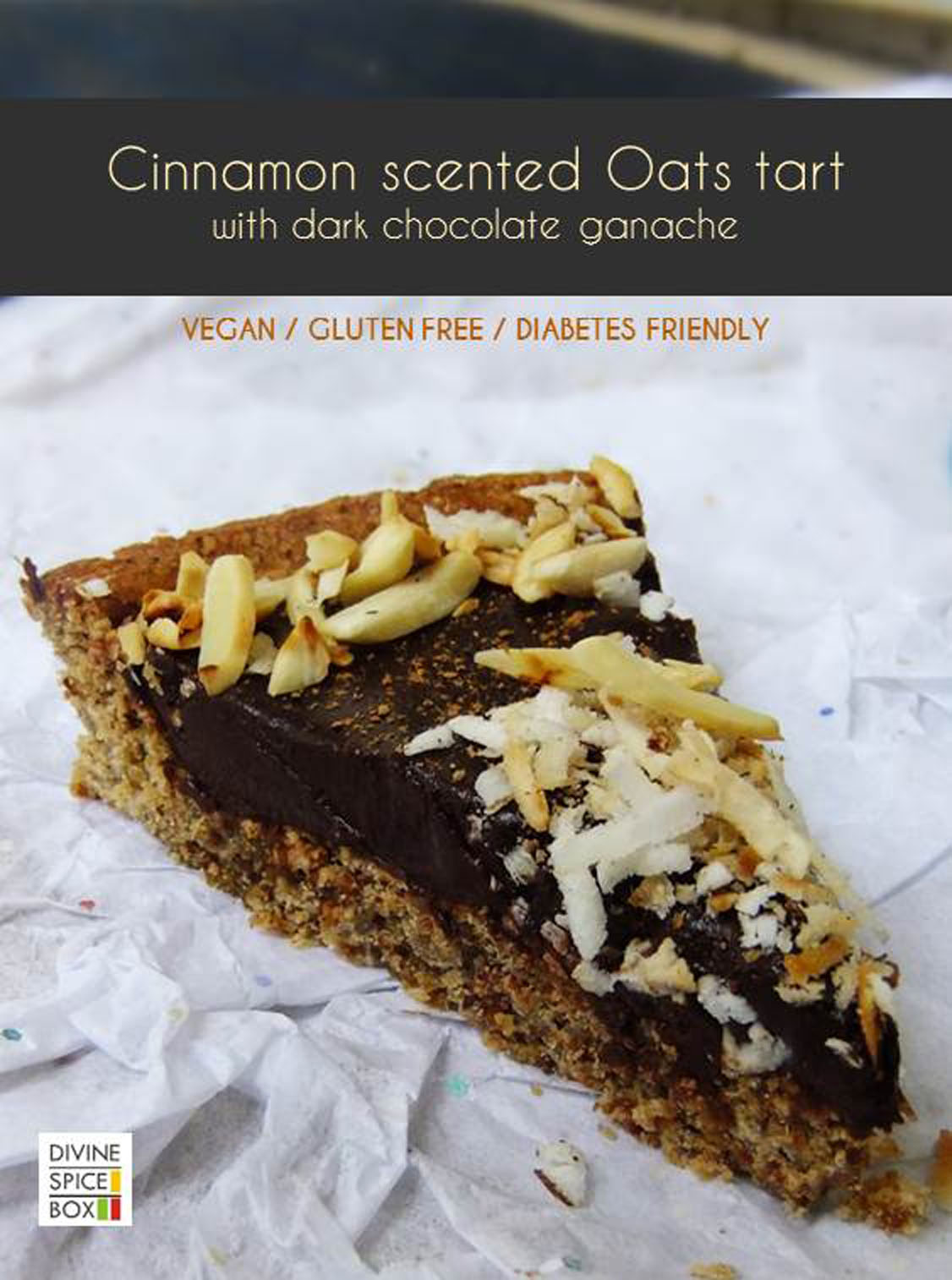 This dessert is made up of 2 components : 1) The Oats cinnamon base 2) Dark chocolate Ganache filling

For The Oats cinnamon base

6-7 almonds, cut into slivers and roasted 1/4 cup coconut shred, roasted (this is entirely optional and diabetes patients may not use any garnishing over the dessert)

We will begin with preparing the tart base.

Assembly, Take the tart base, in this, gently pour the Gananche and with both your hands, lift the tart pan and rotate so that the ganache spreads in the tart cavity. Gently tap the tart pan on a flat surface so that any chocolate bubbles subside. Refrigerate this for atleast 30 minutes before serving. Garnish with toasted almonds and shredded Coconut.

1/12 portion of the tart or 1 inch square Note: You can use Semi sweet chocolate mixed with dark chocolate to give the chocolate ganache a sweeter taste. In that case, do not add any sweet to the tart base. You can also use a 1/2 tsp chili flakes in the ganache for a sweet-spicy kick to the dessert. 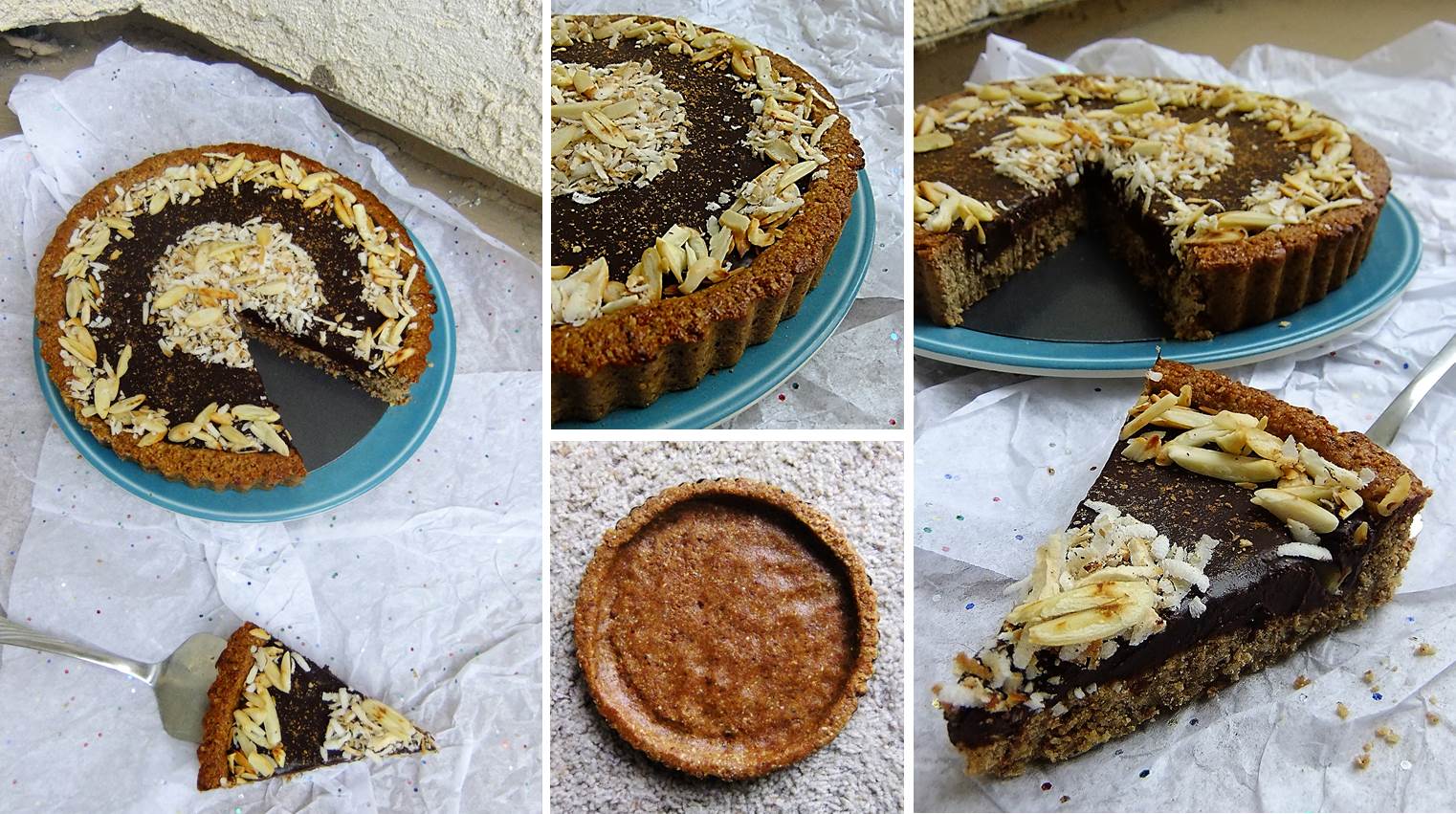 Now, doesn’t that look like something you want to bite into right now? Its amazingly delicious and the flavors wok really well together. Now that i am have tempted you enough with the recipe and the pics, let me tempt you a bit more with the healthy benefits of this dessert :

Oats are an excellent source of manganese and molybdenum. They are also a very good source of phosphorus as well as a good source of copper, biotin, vitamin B1, magnesium, dietary fiber, chromium, zinc, and protein.This is affective in lowering blood cholesterol, keeping low blood sugar and regularizing bowel function. With all these benefits, it is highly recommended to include some portion in your diet everyday.

The first thing to know about Cinnamon is which type to consume. There are 2 varieties – Ceylon and Cassia. The Ceylon is known to have superior health benefits over the cassia variety and as a result is more expensive and difficult to find as compared to Cassia. Look for a bark like, rugged appeal on your next cinnamon purchase to ensure you but the Ceylon variety. Cinnamon has been shown to slow stomach emptying, which curbs the sharp rise in blood sugar following meals, and improves the effectiveness, or sensitivity of insulin. There is an ongoing debate about the exact contribution of cinnamon in helping with type 2 diabetes but research has promising results so far. It was seen that Intake of 1, 3, or 6 g of cinnamon per day reduces serum glucose, triglyceride, LDL cholesterol, and total cholesterol in people with type 2 diabetes and suggest that the inclusion of cinnamon in the diet of people with type 2 diabetes will reduce risk factors associated with diabetes and cardiovascular diseases. The only precaution : don’t over do it ! Consult your doctor if you are thinking of taking cinnamon supplements.

Believe it or not, some studies have linked peanut butter to reduced diabetes risk. The fiber content (2 tablespoons has almost 2 g) may have something to do with it. And since this classic comfort food contains mostly monounsaturated fat, it’s considered heart healthy. Peanut and peanut butter are both low GI and GL foods, due to their content of healthy oils, protein, and fiber that have a positive effect on blood sugar control. Research has shown that peanuts can help control blood sugar in both healthy individuals and those with type 2 diabetes. The calories are on the high side, however, so pay attention to the serving size.

For people with type 2 diabetes, daily dark chocolate consumption of 20 grams per day (that was rich with polyphenols) helped increase the sensitivity to insulin. This is important for blood glucose control. Increasing insulin sensitivity may also help delay the onset of type 2 diabetes in people with pre-diabetes. Dark chocolate improves several important risk factors for disease. It lowers the susceptibility of LDL to oxidative damage while increasing HDL and improving insulin sensitivity.